The ALEX HALEY was originally a Navy salvage and rescue ship, the USS EDENTON (ATS-1) and was recommissioned for Coast Guard duty on July 10, 1999. The conversion from a salvage ship to a Coast Guard cutter took place at the Coast Guard Yard in Baltimore, Maryland, and involved the removal of the stern towing machine, forward crane, and A-frame, and the installation of a flight-deck, retractable hangar, and air-search radar. Additionally, her four aging Paxman diesel engines were replaced with four 16 cylinder Caterpillar 3516 diesel engines. The ALEX HALEY’s primary missions are: homeland security, search and rescue, and international and domestic fisheries enforcement. Her current home port is Kodiak, Alaska, at the U.S. Coast Guard integrated Support Command from where she sails on her current missions. She is known as the "Bulldog of the Bering". The cutter was named after the Coast Guard's first Chief Journalist Alex Haley, the first African-American ever to reach the rank of chief petty officer. Haley is well known as the author of "Roots: The Saga of an American Family.” The ship displaces 3,000 tons at full load. She is 282 feet in length with a 50 foot beam. She is armed with 2 Mk 38 25 mm machine guns and 2 50 caliber machine guns. The ship is capable of 18 knots and carries a crew of 99 persons. 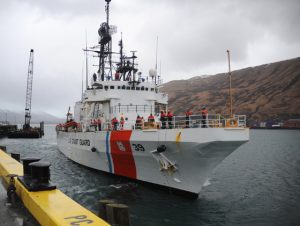