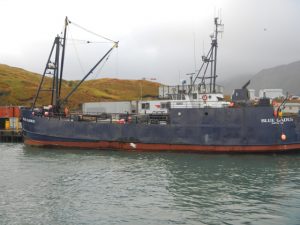 Originally built as a U.S. Navy Yard Oiler (YO 65 Class (Fuel Oil Barge – Self Propelled) YO168, the ship was constructed at the Ira S. Bushey & Sons Shipyard along the Gowanus Canal in Brooklyn, New York, in 1944. The ship has a registered length of 149.9 feet and a beam of 30 feet. She is admeasured at 467 gross and 395 net tons (662 GT ITC). Originally her single shaft was powered by a 560 horsepower Union diesel engine.  Declared surplus after World War II, the ship was converted for fisheries service and named ALEUT PACKER. Now known as the BLUE GADUS, she is shown in Dutch Harbor in October 2012.