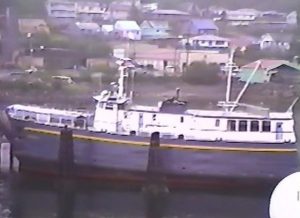 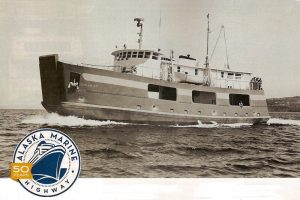 The motor vessel CHILKAT was the original “Blue Canoe” at the beginning of the Alaska Marine Highway System. The ship was built by the J.M. Martinac Shipbuilding Company in Tacoma, Washington, in 1957 for about $300,000. The ship was 99 feet in overall length with a 34 foot beam. She could carry 15 vehicles and 59 passengers. She had a bow ramp which allowed her to load vehicles from a beach as well as from a dock. She started service in Southeast Alaska between Juneau, Haines and Skagway in 1957. In 1963 the CHILKAT was shifted from Southeast Alaska to Prince William Sound where she ran between Valdez and Cordova. After the earthquake in March 1964 she began running between Valdez and Whittier. In 1969, with the arrival of the newly built E. L. BARTLETT, the CHILKAT returned to Southeast to operate between Juneau and Hoonah. In 1977 she was in service between  Ketchikan, Hollis and Metlakatla. In 1988 the ship was sold to private interests.