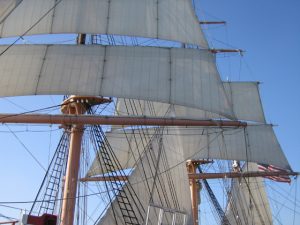 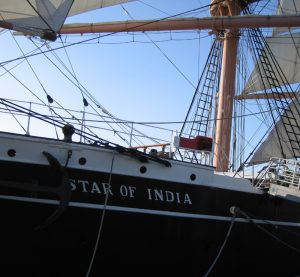 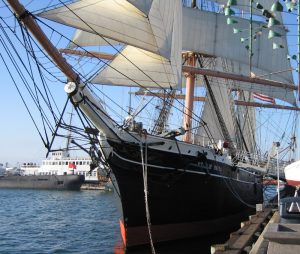 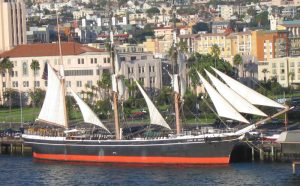 The STAR OF INDIA was built of iron as a full rigged ship in 1863 by Gibson, McDonald & Arnold, of Ramsey, Isle of Man, to participate in the Indian jute trade. She was launched on November 14, 1863, and assigned British Registration No.47617 and signal VPJK. She was named EUTERPE when she was built. From 1864 to 1897 she hauled passengers and freight from England to India, Australia and New Zealand each voyage going eastward around the world before returning to England. She also made ports of call in Australia, California, and Chile on these voyages. From 1898 to 1901 she made four voyages between the Pacific Northwest, Australia and Hawaii carrying primarily lumber, coal and sugar. She was registered in the United States on October 30, 1900. In 1901, EUTERPE was sold to the Alaska Packers' Association of San Francisco, who re-rigged her as a barque (converting the square-rigged aftermost mast to a fore-and-aft rig) and in 1902 she began carrying fishermen, cannery workers, coal and canning supplies each spring from Oakland, California to a cannery site at the now defunct village of Nushagak, Alaska, on Bristol Bay. Each fall she would return with her holds full of canned salmon. In 1906, the Association changed her name to be consistent with the rest of their fleet, and she became STAR OF INDIA. She was laid up in 1923 after 22 Alaskan voyages. The Alaska Packers’ Association operated one of the last fleets of tall ships. Reliance on wind rather than steam was a way for the company to economize. The salmon packing industry was a very seasonal business and old sailing ships were relatively cheap and available. Shortly after the turn of the 20th century, the APA began to replace its wooden ships with iron hulled sailing vessels and bought a number of ships built by Harland & Wolff Co. in Belfast for J. P. Corry and the Indian jute trade. Corry called his vessels the “Star fleet” and named them after countries. The first of these vessels bought by the APA was the Star of Russia and the company liked the name so much they incorporated this pattern with their other vessels, named the Star of Alaska, Star of Finland, etc. By 1930, most of the sailing ships were replaced with steam or diesel powered ships. In 1926, STAR OF INDIA was sold to the Zoological Society of San Diego, to be the centerpiece of a planned museum and aquarium. She currently houses exhibits for the Maritime Museum of San Diego, is kept fully seaworthy, and sails at least once a year. STAR OF INDIA is the fourth oldest museum ship afloat in the United States, after the 1797 USS CONSTITUTION, the 1841 CHARLES W. MORGAN 1854 USS CONSTELLATION, and is the oldest ship in the entire world that still sails regularly. Unlike many preserved or restored vessels, her hull, cabins and equipment are nearly 100% original. And she has a 22 year history sailing to Alaska which makes her one of the most historic members of the Alaska Maritime Community!